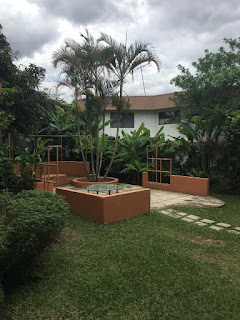 I was born in Texas in 1950.  I didn’t live in a house with air conditioning until I was in High School.  I honestly don’t know how we managed. The Texas Summers are brutal. I think the biggest change I’ve noticed since coming to Costa Rica is not the language or the culture, but the lack of air conditioning and heating. So far the temperature variation in a day is no more than 20° from 60-80° F.  Most days, I expect a high of about 78 and a low at night of about 64. I understand that is pretty much constant all year long.
I’m only referring to the Central Valley, San Jose area. Costa Rica is a very small country (about the size of West Virginia), but it has 5 (I’ve also read 12) different micro-climates, so there are areas that are not as comfortable. I don’t know what the lifestyle of the wealthy is like, but it seems as though most homes and businesses live with the windows open.
I live in a condominium complex with 15 units around a central courtyard (pictured above, in fact, the large window you see is in my bedroom). One would think that it would be a cacophony of sound with all the windows open, but surprisingly, it is quiet most of the time. I seldom hear a TV, unless soccer finals of some sort are being played, then the whole country is tuned in. I average several miles a day of walking through neighborhoods and the city and there is something endearing about life inside of the buildings spilling over onto the sidewalk.
There is the house on the corner which often has the smell of marijuana drifting out of it. Some houses always have music playing, though not blaring. One afternoon, I passed the sounds of a mature man doing his warm-up vocal scales with piano. Who, why, all unanswered. In our complex, a month ago, several teenage girls were singing some interesting harmonies. The harmonies reminded me that Spain was once part of a Muslim empire and much of the culture can still be traced to that influence. One played the guitar and there were maybe 3 voices. They sang the same song over and over and then listened to themselves on a recording. I assumed they were practicing for some performance and as to be expected with teenage girls, the music was often interrupted by giggles and laughter. Someone nearby has guitar lessons each Thursday afternoon and when school started there was a new sound of occasional flute practice. A quarter of a mile away is a high school with a large soccer (naturally) field attached. Each weekday when there is no rain, I can hear the band practicing and marching around the field. Drum lines seem especially popular for soccer games, celebrations, and protests.  Costa Rica is filled with the sounds of life and with the windows open we all get to share in it. 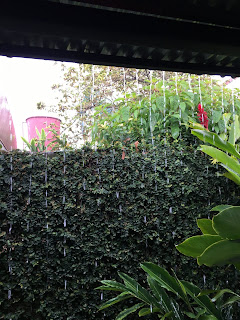 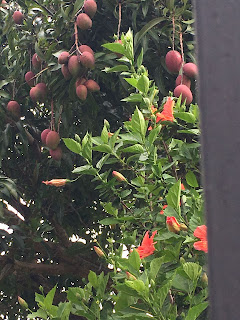 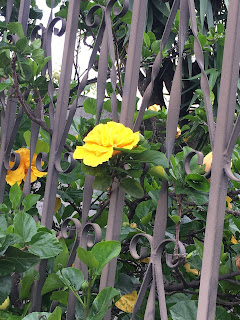 Rain at our outdoor classroom, mangos growing in someone’s yard, random flower on my walk to school.


Enough for now. Every day for the last two weeks, I have at some point thought about how fortunate I am to be living here. We will see how I'm feeling next month.
Posted by Jack at 11:55 AM 2 comments: 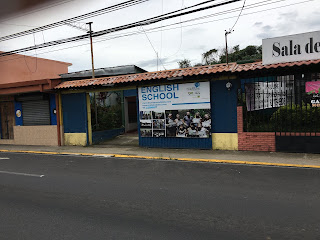 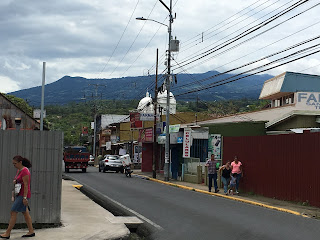 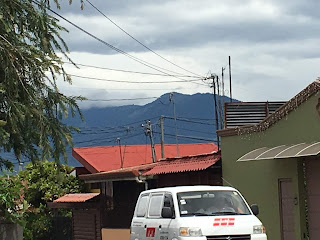 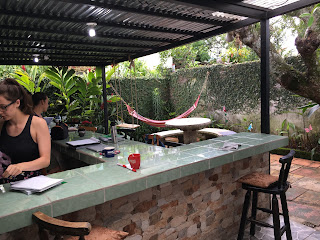 The language school, the view to the North and South, and our outdoor classroom.

In July of 2017, I could have never connected the dots of my life, in any way possible, that would have found me living in Costa Rica in July of 2018. This journey began in October of 2017 with a knock on the door of my 40-year-old mobile home which sat on an acre of land both of which I had inherited from my parents. The person knocking on the door was a landman (actually a very nice lady) for a gas pipeline company, telling me that their company wanted to run a pipeline straight through my mobile home and that there could be no structures within 100 yards of it.

Now for the most part, that sounds like striking gold, but there are always complications. You know, the genie gives you 3 wishes but somehow it never works out quite right. The first problem is that pipelines in Texas are considered public utilities. That means that they have the right of eminent domain and that in turn means they only have to give you what your property is worth, the appraised value. They usually give you more than that to stay out of court, but nevertheless, it is a little like negotiating with a gun to your head. The other downside, is that my cost of living at that location was extraordinarily low. That was important to me since, for a myriad of reasons, I was going to be trying to live the rest of my life only on my social security income in retirement. That wouldn’t have been easy, but I probably could have done it. The other downside was that to move the mobile home and set it up as it was on my property was going to cost me around $30,000 to $35,000. After thinking about it, that seemed like a lot of money to be investing in a 40-year-old mobile home.

While these things were going on in the background, I had worked myself out of a job at my good friend’s financial planning business. That didn’t worry me too much because I had reacquired all of my investment certifications and licenses. With my experience and the boatload of initials behind my name (CFP,CLU,ChFC,CFS,RHU etc) I was confident that I would find another job. But times have changed. In the new electronic world of job hunting, everything is computerized and impersonal. You are, at least in the large companies who can afford such things, an electronic piece of paper along with thousands of others sorted, filed, and rejected with never a minute of eye to eye contact. I also underestimated the age discrimination. 100 applications later, I was still looking for a job.

So if you have a fixed income and can’t find a job in your field, what do you do? Move someplace where the cost of living is lower or become a greeter at Walmart. At first, I was thinking of living in Colombia or Ecuador and acting like a retired person with very little income. But if I could make a little money working, that would make life better, but what could I do?  Wait, I have a degree in English! Yeah, that piece of paper that has never been of any practical value to me. So I started researching English as a Second Language (ESL) certifications and came to believe that the one that would offer me the most recognition and opportunity was the TEFL (Teaching English as a Foreign Language). It is recognized all over the world. Unfortunately, I found out that I couldn’t teach all over the world because almost all of the Asian countries have a very low retirement age that I had long since passed. The same went for the European Union countries. Central and South American countries don’t have those restrictions.

The course I needed for the certification was offered in a number of places in the U.S., in other countries, and online. I figured why not go South, take the course and be on the first leg of my journey. So after coming to an agreement with the pipeline company, I started plotting this expedition. Becoming an ex-patriot (no political connotations) seemed like the best option that I had for living some semblance of a comfortable retirement. So over the next three months I sold, donated, gave away or threw away, everything I owned except for 2 suitcases, an overhead bag, a backpack stuffed with electronics and a few boxes of keepsakes, which I stored at a friend’s house. There is a story that the explorer Hernan Cortes, upon arriving in the new world, burned his ships so there would be no temptation to go back to Spain. I did the much the same thing. In reality, I could always go back to the U.S., but I wouldn’t have much of a life if I did.

On June 1, I arrived in San Jose, the capital of Costa Rica, and began a certification class the following Monday, in Barva, one of the suburbs. There were eventually 20 people in my class. We started with 16 but received four more students a couple of weeks later, who had been taking the course in Nicaragua, but fled the rioting and political unrest currently sweeping that country. There was one other senior citizen and the next oldest person was 32 and then they ranged down to 20 years old. There were 5 guys and 15 ladies. 14 of the ladies were less than 29 years old. The normal person who teaches English abroad is a young person who wants to travel and have an adventure for six months or a year then go back to real life. I was old enough to be their grandfather, I hate to travel, and I was looking to relocate permanently. Those things made me a bit of an odd duck. For those of you who are always bitching and moaning about the millennials and other young people, you should have seen these students. Though I frequently referred to them as “the children” to my friends, this was the largest group of smart, talented, adventurous people I have been with since my short foray into law school. I would have been proud to have claimed any of them as my child and I am proud now to call many of them my friends. Any one of them could run circles around most of the people I know. They had no trouble excelling beyond my talents. I was lucky to get an acceptable grade in the course, which ended up being one of the most intense classroom experiences I have ever encountered.

I’m going to end this post by saying that it looks like I am going to stay in Costa Rica. It is more expensive than many of the Latin American countries, but it has a lot of advantages that I will go into at a later date. I had my first job interview on Monday, July 2, at Universidad Politécnica Internacional. It is a private university with about 900 students who are all required to speak English when they graduate and have to meet certain government standards. I walked out of the interview with a job and an ego boost that I haven’t had in a while. The conversational English teaching jobs don’t pay particularly well by U.S. standards and one may not get very many hours per week, so it is not unusual in this occupation to have to string together a group of income producing endeavors. We will see how that works out for me.

In my next blog, I will talk a bit about my experiences in Costa Rica thus far and my impressions of life abroad. It is a beautiful country and a different way of life and in many ways, it is a real hoot. In the month I have been here I have become infatuated with it. I can’t call it love yet, because most of my time has been spent in class, but it has my attention. Oh yeah, my ability to speak Spanish upon arriving was limited to; una cerveza por favor and donde está la biblioteca, one of which has been useful, the other, not so much.